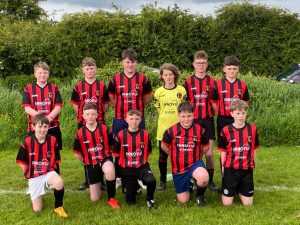 Thursday 2nd June
U14 Boys
Askeaton 2-7 Kildimo Utd
Played in Kildimo
Matthew Kehoe opened the scoring for us after 10 minutes. Kildimo scored twice in 5 minutes to lead 2-1 before Jamie Sheahan scored a well worked goal to level at 2-2. Unfortunately this was as good as it got for Askeaton as the league leaders scored two more before halftime, 2-4.
As the 2nd half wore on Askeaton with only a bare 11 and 4 of which were U12 got very tired. Kildimo eventually settled the tie with two goals midway through the second half. The Champions elect had the luxury of missing a penalty before they wrapped up the scoring with their 7th of the night. Worthy league champions with a good squad. We have a shield final to look forward to against Kilcolman.

Thursday 2nd June                                          Weekly Observer Division 2
Askeaton AFC 1-0 Glin B
Cian Smith
Great to say we are back to winning ways after a tough battle Thursday night against a good Glin B side. In the first half we didn’t create too much, Glin got a man sent off on the 35 minute mark and from there it was one way traffic. We created loads of chances but couldn’t find the net but thankfully with 4 minutes from time Cian Smith found the net from great work from his brother Stephen down the left hand side, taking on 3 players before crossing it to Cian. All the boys battled till the final whistle again and got the 3 points. Killian deserves a mention as he made 2 brilliant saves. 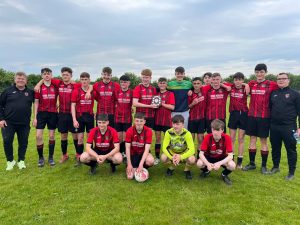 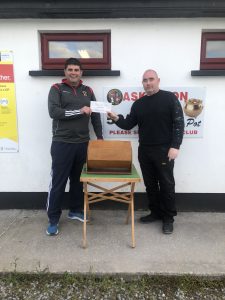 ASKEATON AFC 50/50 SPLIT THE POT!!
Our Split the Pot draw was held last Tuesday, May 31 in the clubhouse. The winner of €172 was Wayne Lenihan.
Split the Pot is our weekly fundraiser for Askeaton Football Club. You can enter by writing your name and contact number on the envelope and place your €2 into the envelope. The envelope should be placed into one of the buckets located in SuperValu, Centra, Askeaton Post Office, Top of the Town Bar, Cagney’s Bar, Shanahan’s Shop, Boss Barbers, Brian Collins Bookmakers, Moran’s Hardware, Askeaton Soccer Pitch. You can also enter online at www.askeatonafc.ie The draw is held every Tuesday evening. Half of the money entered into the draw is given in prize money and the other half goes towards funding activities for our club. We thank you all for your continued support of this fundraising initiative, it is very much appreciated.