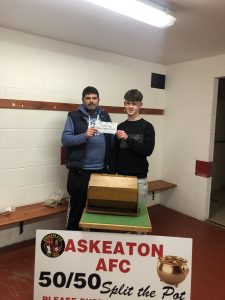 ASKEATON AFC 50/50 SPLIT THE POT!!
Our Split the Pot draw was held Tuesday, November 29th in the clubhouse. The winner of €156 was Hugh Keaveney.
Split the Pot is our weekly fundraiser for Askeaton Football Club. You can enter by writing your name and contact number on the envelope and place your €2 into the envelope. The envelope should be placed into one of the buckets located in SuperValu, Centra, Askeaton Post Office, Top of the Town Bar, Cagney’s Bar, Shanahan’s Shop, Boss Barbers, Brian Collins Bookmakers, Moran’s Hardware, Askeaton Soccer Pitch. You can also enter online at www.askeatonafc.ie The draw is held every Tuesday evening. Half of the money entered into the draw is given in prize money and the other half goes towards funding activities for our club. We thank you all for your continued support of this fundraising initiative, it is very much appreciated. 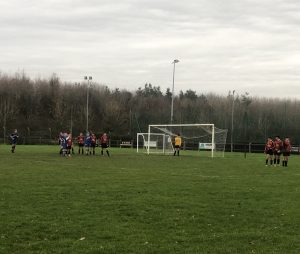 Saturday 3rd December
Youths Division 3
Askeaton AFC 2-3 Feenagh (0-0 HT)
Tyrique Harte
Evan Costello
An unlucky loss today to a very good Feenagh side. The boys played their hearts out and went 1 up in the second half with a goal from Tyrique Harte, assisted by Stephen Maune. Unfortunately Feenagh scored two quick goals within 5 minutes and we were trailing behind until Evan Costello levelled things up again. At this stage we would have been delighted to share the points but in the last 30 seconds of the game Feenagh got the winner. Very exciting game between two very even teams.
Team Aidan Fogarty, Arron McCarthy, Aaron Mulcahy, Cathal Moran, Stephen Maune, Aron Kelly, Luke Kelly, Thomas McCarthy, Evan Costello, Sam Harty, Tyrique Harte, Daniel Ruane, Christopher Sheehy, Conor Purcell. 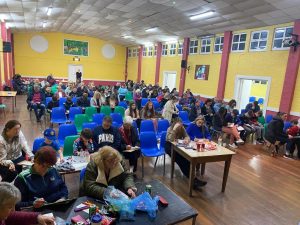 THANK YOU.
Thank you to all who supported our Bingo last night. Approximately 130 people in attendance with over €930 paid out in prize money. Thanks to everyone who bought tickets at the Bingo and also outside SuperValu on Friday for our Christmas Raffle. Thanks to all the sponsors for donating prizes, to SuperValu for the use of their premises and to Patsy McCarthy for the use of his canopy which kept us some bit warm on the day. Your continued support to our club is very much appreciated xx
See list of prize winners. 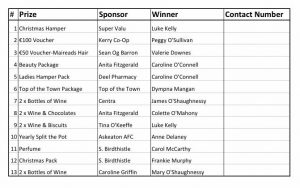