RESULTS
Saturday 29th October
U10 Girls
Askeaton v Breska Rvrs (Non-competitive)
On our very first outing, we couldn’t be prouder of these girls. Only one of this team had ever played a match before. We were down at halftime but put in a terrific performance in the second half. Their keeper saved 3 one on ones and we hit the post twice. Mia O’Shaughnessy scored two goals but all eight players were terrific. They put in some great tackles in the second half, juniors would have been proud of.
Looking forward to our next match.

The Casey Foods U14 Boys Div 2
Askeaton AFC 0-4 Shountrade B
What a performance in the first half, we only had 9 players, unlucky to go in 1 down. There legs kept going till a doubtful offside went in, this drained us a bit and eventually we ran out of steam but by god is there spirit in these boys and girls. Wonderful and proud to watch. 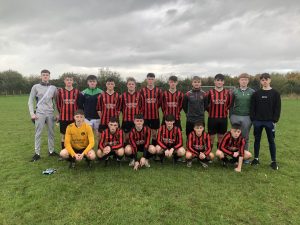 Youths Division 3
Askeaton AFC 2-1 Shountrade AFC
Sam Harty (2)
Great hard fought win in very wet conditions.
We started off the better side and deservingly went 1-0 up thanks to a Sam Harty goal. Unfortunately we conceded a goal not long after and the sides went into the half time break 1-1.
Again we started the second half the stronger of the two sides but due to some great saves by the Shountrade keeper it took a penalty scored by Sam Harty for us to claim all 3 points. A great team performance from all 14 players.
Team: Cathal Guerin, Stephen Maune, Cathal Moran, Conor Purcell, Aaron Mulcahy, Aron Kelly, Thomas McCarthy, Evan Costello, Luke Kelly, Michael James Harty, Sam Harty, Tyrique Harte, Daniel Ruane, Christopher Sheehy. 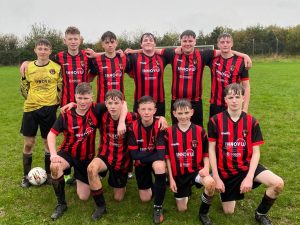 Monday 31st October
The Issane Stonework U16 Boys Div 2
Askeaton 3-3 Ballingarry B
Christopher Sheehy ⚽️
Shane Ryan ⚽️
Zach Birdthistle ⚽️
The home team led on 10 minutes through Christopher Sheehy after being put through by Jamie Ruane. Both teams had chances for the rest of the half but it was Ballingarry who took them. The visitors catching the home team on counter attacks. Halftime 1-2
Askeaton responded well in the early part of the second half and were rewarded when Shane Ryan finished the rebound after the keeper saved from Zach Birdthistle. The home team pushed for a winner when Zach Birdthistle scored from the spot after he was hauled down when through on goal. Just when it looked like we could get an assurance goal, a Ballingarry forward was adjudged to have been fouled in the box and they scored the resultant penalty. In the last 10 minutes Shane Ryan had a header cleared off the line and Jamie Sheahan headed narrowly wide
Final Score 3-3
Team: Cathal Guerin, Dean Murphy, Danny Murphy, Shane Collins, Ben Fitzgerald, Jamie Ruane, Christopher Sheehy, Jamie Sheahan, Shane Ryan, Zach Birdthistle, Willie Russell, Aidan Kelly.

WORLD CUP 2022 SCORE PREDICTOR.
Entry fee is €10.
Predict the scores of the group games.
Gain points based on your predictions.
Correct Score = 3 points.
Correct Result = 1 point.
The winner is the player with the most points overall at the end of the group games.
Winning prize is €250
If interested text Jordan 0871300040 with your email address so he can email you the spreadsheet to fill out. Payment can be made through PayPal (jordanfitzy91), Revolut (0871300040) or cash to a committee member.