Sunday 3rd April
JUNIORS
WEEKLY OBSERVER DIVISION TWO
Askeaton AFC 3-1 Breska B
Sam Duggan
Sean Whelan
Stephen Smith
Brilliant display from the lads, some good football played. Breska played most of the game with 10 men and were hard to break down at times but the lads kept pushing and got two well worked goals near the end to get the win. 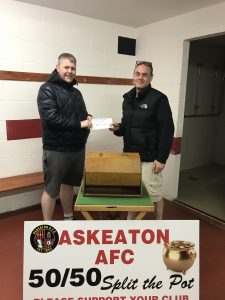 ASKEATON AFC 50/50 SPLIT THE POT!!
Our Split the Pot draw was held last Tuesday, March 29 in the clubhouse. Eddie Ryan collected last weeks winnings on behalf of his wife Noreen from Norman Birdthistle.
The winner this week of €165 was Carol Barry.
Split the Pot is our only fundraiser for Askeaton Football Club at the moment and we would encourage all parents and players to please support it. You can purchase your envelopes in SuperValu, Centra, Askeaton Post Office, Top of the Town Bar, Cagney’s Bar, Shanahan’s Shop, Boss Barbers, Brian Collins Bookmakers, Moran’s Hardware, Askeaton Soccer Pitch. You can also enter online at www.askeatonafc.ie The draw is held every Tuesday evening. Half of the money entered into the draw is given in prize money and the other half goes towards funding activities for our club. We thank you all for your continued support of this fundraising initiative, it is very much appreciated.