U/12 Boys Division 3
Athea 1-1 Askeaton
(Paddy Harty)
Great result on Saturday with a 1 – 1 away to Athea. The game could have went either way in the end. All the boys worked very hard in great conditions against a physically stronger team. While we definitely rode our luck at times we also played some really good football and a win would not have been undeserved !! Onwards and upwards for our next game on Wednesday.

U/16 Boys Division 3
Glantine 4-0 Askeaton
A bad day at the office going down to a very strong Glantine side, with only one sub on the day we stayed in it in the 1st half but unfortunately fell apart in the 2nd. We will go again on Thursday evening V Rathkeale.

U/10 Girls
An absolutely super display yesterday from our u/10 girls against Creeves in beautiful weather for a game of football. With what can only be called a stone wall defence from Zoey, Laoise and Ellen and some serious goalkeeping from Ava, midfield again super strong with Rachael, Mya and Mariah putting in some great work to make it a strikers dream for Sam up front. Great game girls.
Goals from.
Samantha 5
Laoise 1

Juniors
Weekly Observer Desmond Cup 2nd Round.
Rathkeale B 3-1 Askeaton AFC
(Sean Whelan)
We went one nil up within the first 10 minutes of the game and then conceded from the penalty spot before the break. 1-1 at halftime. We went down to 10 men early in the second half and was a big ask from our lads but we had our chances and fought to the end but it wasn’t our day. 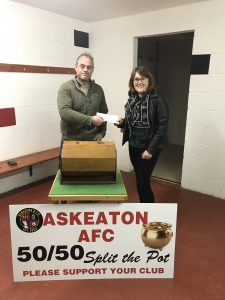 SPLIT THE POT.
Our Split the Pot was held last Tuesday 22nd March. Rachael McDonagh Cregan was presented with the winnings from the last draw on behalf of her parents TJ and Mary and drew out the winner for this week. The jackpot was €194 and the winner was Noreen Ryan. Next draw Tuesday 29th March. Envelopes are available to purchase in most businesses locally and online through our website.