Saturday 15th October
The Casey Foods Distributors U14 Boys Div 2 Shannonside AFC 3-2 Askeaton AFC
Tom Harty ⚽️
Willie Faulkner ⚽️
U14 boys lost 3-2 to Shannonside. Only 10 players for the 1st half where we went 2 nil down. Went to 3 nil at the start of the 2nd half. We responded with 2 well worked goals, and could of had more!! We were well on top which resulted in Shannonside going to 5 at the back for the last quarter. Draw would have been a fair result, another really spirited performance and great improvement 👏 👏

Sunday 16th October
Weekly Observer Division One
St Itas 2-4 Askeaton AFC
Pete Harty ⚽️
Niall Barry ⚽️
Sean Whelan ⚽️
Stephen Smith ⚽️
Today we started strong again with Sean Whelan nearly scoring in the first couple of minutes. We were putting St Itas under serious pressure and paid off as we won a penalty, Niall was taking down in the box and Pete slotted home from the spot. The lads kept the high press going and we had the ball in the net from a lovely chip from Pete from 30 yards but the ref cancelled it for offside. We got our second goal from Niall when he got onto the pass and went one on one with the keeper and put it in the corner, shortly after we made it 3 nil after a long ball over the top and Itas keeper miss kicked it, Sean pounced on it and finished from a tight enough angle. St Itas went one on one with Killian and he produced save of the season so far but unfortunately we conceded from the corner straight after.
We started the second half really well, we created a lot of good chances but St Itas keeper made good saves to keep them in it and mid way through the second half Itas scored from a corner. The lads kept going, didn’t drop the heads and we got another penalty when once again Niall was fouled inside the box, this time Stephen Smith put the keeper the wrong way and we went 4-2 up. Near the end Yanek just missed the target after a great ball across the box from Alex. Have to give our keeper Killian a special mention as made 4/5 top saves. On another day we could of scored 8. All the boys were brilliant today. Shane Long and Niall Barry were outstanding. We played lovely football against a physical side. 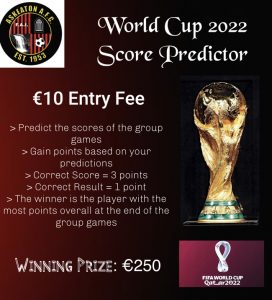 WORLD CUP 2022 SCORE PREDICTOR.
Our Euro Score Predictor was so enjoyable last year so we’re back, but this time for the World Cup!!
Entry fee is €10.
Predict the scores of the group games.
Gain points based on your predictions.
Correct Score = 3 points.
Correct Result = 1 point.
The winner is the player with the most points overall at the end of the group games.
Winning prize is €250
If interested text Jordan 0871300040 with your email address so he can email you the spreadsheet to fill out. Payment can be made through PayPal (jordanfitzy91), Revolut (0871300040) or cash to a committee member. 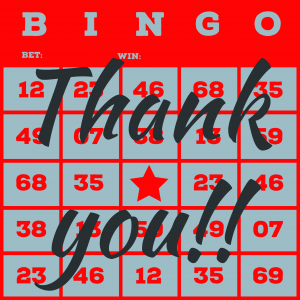 THANK YOU.
Askeaton AFC sincerely thank our local community for the great support we received at our Bingo Night yesterday evening. Approximately 180 people in attendance with over €850 paid out in prize money. Our next Bingo Night is Saturday 3 December. We look forward to seeing you all again