Tuesday 7th June
U/12 Girls
Kilcolman Rovers 2-1 Askeaton AFC
Our U/12 girls lost 2-1 to Kilcolman in our last league game last Tuesday in a game where a draw would have kept us in the running for a Shield final place. Elada Kanopaite, one of our regular midfielders scored her second goal for the club in the 2nd half to equalise their 1st half goal. Unfortunately a penalty awarded against us in the last minute for a controversial hand ball resulted in Kilcolman getting the winning score from the spot. Well done to the girls on a good season of football (all 20 of them) and we look forward to seeing them all next season. 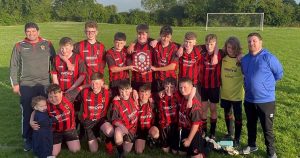 Thursday 9th June
U14 Boys Division 2 Shield Final
Kilcolman Rovers 1-2 Askeaton
Askeaton got off to the best possible start when Ben Fitzgerald put a 40 yd free kick into the top corner after 5 minutes. Visiting keeper Luca Zoncada was the busiest of the two keepers in the opening half but Askeaton still held the home side scoreless at halftime. 3 minutes after the restart, Brooklyn Delahunty scored the second after a through ball from Jamie Sheahan. 2-0 to the visitors. Sheahan himself clipped the bar a few minutes later in a move that could have made the game safe. Kilcolman kept putting pressure on the Askeaton defence. Corner after corner was well defended by the red & black. Matthew Kehoe saw his effort cleared off the line 10 minutes from time. Kilcolman laid siege to the Askeaton goal for the last 10 minutes and were rewarded with a goal from a breaking ball. The last 5 minutes of normal time and 4 minutes of injury time showed brave defending from Askeaton as they held out and got the victory. Well done Kilcolman team, we’ve had some great battles this season.
Team: Luca Zoncada, Shane Collins, Danny Murphy, Lorcan Blackwell, Ben Fitzgerald, Aidan Kelly, Matthew Kehoe, Jamie Sheahan, Brooklyn Delahunty, Shane Ryan, Alex Kelly, Nathan Dalton, Jack Mulcahy, Paudie Ryan, Koi Tucker. 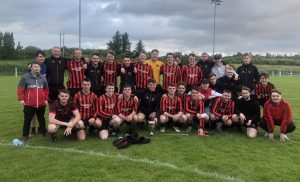 ASKEATON AFC 50/50 SPLIT THE POT!!
Our Split the Pot draw was held last Tuesday, June 7 in the clubhouse. The winner of €174 was Tom Corrigan.
Split the Pot is our weekly fundraiser for Askeaton Football Club. You can enter by writing your name and contact number on the envelope and place your €2 into the envelope. The envelope should be placed into one of the buckets located in SuperValu, Centra, Askeaton Post Office, Top of the Town Bar, Cagney’s Bar, Shanahan’s Shop, Boss Barbers, Brian Collins Bookmakers, Moran’s Hardware, Askeaton Soccer Pitch. You can also enter online at www.askeatonafc.ie The draw is held every Tuesday evening. Half of the money entered into the draw is given in prize money and the other half goes towards funding activities for our club. We thank you all for your continued support of this fundraising initiative, it is very much appreciated.